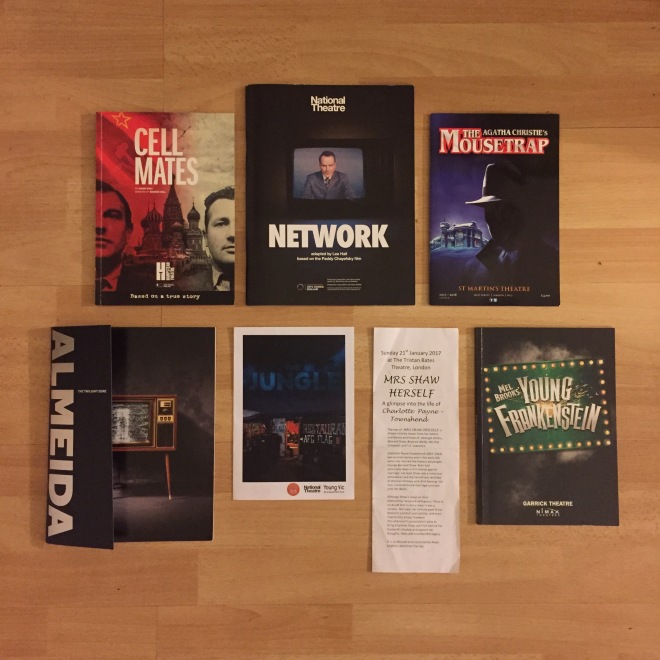 It’s not just Jodie Whittaker who can time travel, you know! Journey with me now to January 2018 for a spin around the seven plays I saw that month…

The Jungle / The Young Vic

The Young Vic was reconfigured for The Jungle into a makeshift refugee and migrant camp cafe in Calais, complete with rough MDF tables and national flags draped overhead, all brilliantly designed by Miriam Buether. From aromatic cooking smells to the dusty earth floor, every detail contributed to this compelling production.

Based on real life experiences gathered in the Calais camp by writers Joe Murphy and Joe Robertson, the play showed the challenges faced by camp residents and volunteers, with the threat of eviction constantly present, and increasing hostility from the authorities.

Directors Stephen Daldry and Justin Martin’s production highlighted the devastating circumstances of individuals in the camp, without sentimentalising or simplifying their stories. It didn’t shy away from the tensions between national and cultural communities within the camp, or the consequences of well-meaning do-gooders’ interventions.

The impressive cast, which included some former Calais camp residents, was outstanding, giving voice to the lived experience of refugees and migrants and communicating a powerful affirmation of hope and humanity against appalling odds. It was certainly one of the theatrical highlights of 2018.

Want to help? Donate, fundraise or volunteer with https://helprefugees.org

Having watched all five seasons of Breaking Bad twice, there was no question whether or not I was going to see Bryan Cranston’s UK theatre debut in Network at the Lyttelton Theatre. I saw it not once, but twice. And went to his NT Platform event. And went to the book signing afterwards. Too much? Not according to the restraining order, I’ll have you know…

Cranston went on to win numerous awards for his portrayal of Howard Beale, an ageing TV news anchor whose on suicidal on-air unravelling makes him ratings gold. And in my completely unbiased opinion*, he deserved them all. Hearing him roar the original 1976 movie’s most famous line “I’m mad as hell and I’m not going to take this anymore!” was especially spine-tingling.

His exceptional performance as Beale, all rage and tear-streaked vulnerability, was mesmerising and the production as a whole was a superior affair. Director Ivo Van Hove slickly orchestrated myriad elements including live cameras, outside broadcast, video screens, and an onstage restaurant, complete with members of the audience as patrons.

What could have been a case of style over substance (and other productions from van Hove I’ve seen tend to lean this way. More of that anon, folks…) coalesced into a glossy yet satirical skewering of the news media and what happens when cynicism and greed take hold. A message even more keenly felt in today’s consumerist, content-obsessed world than in the 1976 movie, superbly adapted here by Lee Hall, from Paddy Chayefsky’s original script, as a vital, contemporary piece of work in its own right.

Director Edward Hall’s revival of Simon Gray’s Cell Mates at Hampstead Theatre promised much, being based on an intriguing real-life espionage story and with Geoffrey Streatfeild (always a charismatic stage presence) in the cast. But somehow didn’t quite hit its mark…

The lives of George Blake, a Dutch KGB spy, and Sean Bourke, a petty criminal, are bound together in 1966 when Bourke helps Blake escape from Wormwood Scrubs. The play then moves to Moscow, where Bourke, on a visit to Blake’s new home, is effectively imprisoned against his will by the Soviet secret service. Perhaps with Blake’s contrivance…

Duplicity runs through the play and there’s an “odd couple” vibe too with Bourke’s loquacious character contrasting with Blake’s prissy nature. While the comic elements were diverting if unsubtle (hello, comedy KGB heavies!), any deeper exploration into the two men’s relationship was lacking.

So, enjoyable on the surface, but overall a missed opportunity to examine what really locked these former cell mates together (geddit?!)

Try as I might, I’m always unable to resist calling this “The Twiglet Zone”. Sorry. Anyway, on with the play… Soon to transfer to the Ambassadors Theatre, I saw the original production of The Twilight Zone at the Almeida. Adapted by Anne Washburn and directed by Richard Jones, eight television Twiglet (sorry) Twilight Zone stories were deftly crafted into an unsettling, spooky and uniquely theatrical experience.

Paul Steinberg’s monochrome design and Mimi Jordan Sherin’s inventive lighting were key in creating an otherworldly atmosphere, where things are never quite what they seem. The versatile cast portrayed a variety of mid-century American archetypes, oddballs and aliens, complete with the strangely mannered verbal delivery of the original TV shows.

Excellent illusions and sleight of hand added to the spectacle, plus low-fi props including my particular favourite, a giant cardboard eyeball. Beneath the kooky surface there was substance too, like all the best sci-fi, reflecting on alienation, otherness and suspicion in our contemporary world.

Your next stop, the Twiglet Zone… (book here if you dare!)

Simply staged and compellingly told, the one-woman play Mrs Shaw Herself gave a fascinating insight into the true life story of Charlotte Payne-Townshend, an Irish heiress who used her wealth to support social issues, particularly women’s rights. She also happened to be married to the renowned, and not at all shy and retiring playwright, George Bernard Shaw.

All too often in the shadow of her flamboyant husband during her lifetime, Mrs Shaw Herself gave Payne-Townshend the recognition she deserves, while respecting her private character. Co-devisers, Alexis Leighton and Helen Tiernan, draw from Payne-Townshend’s letters and diaries, creating a vivid picture of an exceptional woman.

The duo have presented the play at Shaw’s Corner in Hertfordshire and also take it to libraries and literary events. If you have an interest in hidden histories and remarkable women (and if not, why not, for goodness sake??) future performances are well worth checking out.

Agatha Christie’s murder mystery classic, The Mousetrap, has been playing for a mind-boggling 66 consecutive years in the West End. I decided to pay a visit to see what keeps audiences visiting and indeed re-visiting, with well over 27,000 performances chalked up since its premiere in 1952*.

All the requisite ingredients are present – an isolated location, a stormy night, dubious posh characters with compromising secrets, and of course MURDER… It’s slickly staged and engagingly played, zipping along nicely and meeting all the hoped for Golden Age of English Crime tropes.

While faithful to its traditional setting, it didn’t feel stale and there was certainly no sense of the cast going through the motions. It’s sincerely delivered and a very enjoyable production. I’m glad to have seen it, and might even go again in another 20 years or so, as it will likely still be playing in 2038 at this rate…

Audience members are urged to “keep the secret” as regards the guilty party so there’s no spoilers from me, and I’ve already forgotten whodunnit anyway. Suffice it to say, no mice were harmed during the production (my cats were disappointed to hear). 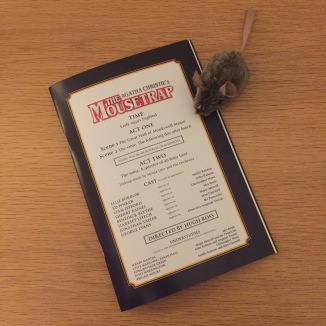 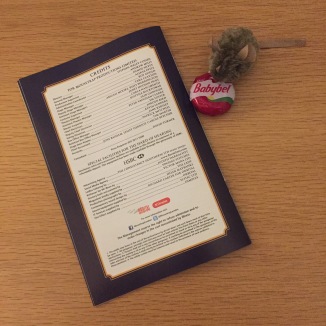 Always have a comedy or musical lined up each January. That’s Rule 1 in the Throwback Theatre Book of Spurious Rules. It makes the gloomy first month of the year so much easier to bear. And with Mel Brooks’s relentlessly funny musical, Young Frankenstein, this wise directive was obediently followed on both counts.

Directed and choreographed by Susan Stroman and based on Brooks’s infamous 1974 movie, Dr Frederick Frankenstein (“It’s Fronkensteen!”) is driven by hubris to animate The Monster, with terrible yet hilarious consequences. Just like Mary Shelley’s original, except with added tap-dancing.

Fusing high-stepping Broadway musical routines, vaudeville schtick and bawdy “schwanzstucker” gags (you can guess what that means can’t you? Can’t you?! What are you doing reading this blog then??), Young Frankenstein absolutely delivered the goods necessary to distract me from the winter blues. For a bit anyway.

Ross Noble made a particularly strong impression as unhinged sidekick Igor, following in the eccentric steps of the uniquely talented Marty Feldman. A challenging act to follow, but Noble did a fab job, demonstrating heretofore unknown singing and dancing skillz, and proving a worthy successor to Feldman.

And I know this is Throwback Theatre, not Throwback Cinema, but Gene Hackman’s cameo as the blind priest in the original movie still cracks me up every time: “Wait. Where are you going? I was going to make espresso!”

One thought on “Throwback to January 2018”